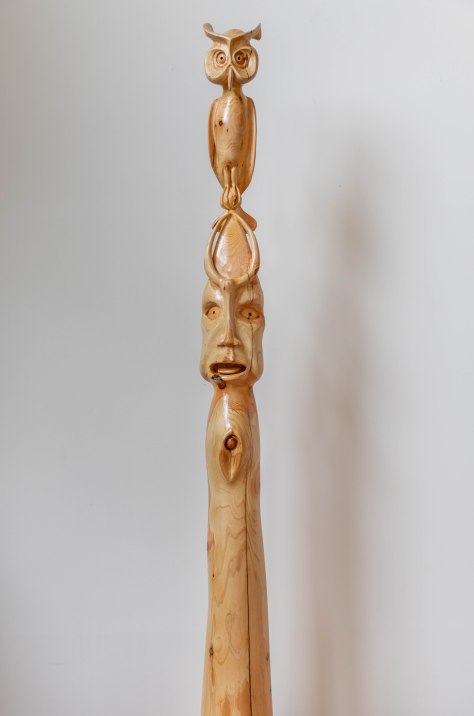 The Goat Herder, The Fox, and The Owl

Once there lived a goat herder who came from a large family. The tenth of eleven children, he was gentle and good natured, but he had been born with a tiny pair of horns. At first the horns were barely visible, but as he grew, the horns grew, too. People stared. The family was well known in the community and could not stand the gossip. So when the boy reached adolescence, the eldest son sent him to a hillside to tend the goats, so he would no longer embarrass the family.

One day the young goat herder made friends with a fox. The fox was charming and made the goat herder feel special. They played together, and the fox told him how beautiful his horns were. The goat herder relished this new sense of belonging. He looked forward to visits from the fox. For the first time in his life, he appreciated who he was.

This went on night after night. Each time the fox told the goat herder a convincing story about why one of the baby goats had disappeared. Nevertheless, the goat herder became so discouraged, he couldn’t  think straight. His only comfort were the reassurances from his friend, the fox.

On the eleventh night, the goat herder was down to just one baby goat. He was determined to keep this baby safe, but he grew so sleepy. He called out to the fox, “I can’t stay awake. Please, watch out for my last baby goat. I just need a few hours of sleep.”

“Of course, my beautiful friend,” the fox said, “it would be my pleasure! You rest, I will have your back.” And so the goat herder drifted off into a peaceful slumber.

The next morning the goat herder woke to silence. No sounds from the valley. Now all the baby goats were gone! The goat herder cried in horror. He sobbed loudly, hoping the fox would soon be by his side. He cried and cried, but still the fox did not come.

The goat herder cried all day and all night until his tears formed a river around his house. He decided he had no choice but to drown himself in his own tears.

Suddenly, just as he waded into the river, he saw an owl fly over head. He became frightened, then angry.

He remembered that the fox told him the owl had eaten the first baby goat. He screamed at the owl and shook his fists in rage. The owl stopped in front of him, his large, unblinking eyes stunned the goat herder into stillness. The owl told him what he knew about the fox and what he had seen. The goat herder realized he had been tricked.

He understood that he’d so desperately sought approval, he paid attention to his pride and not the feelings in his heart. The owl said, “you have a big heart and need to accept your goodness. Trust yourself. Avoid those who only want to fill you with a false sense of pride.”

From that day on, the goat herder and the owl became good friends. Unlike the fox, the owl was not full of flattery and praise. The owl used his wisdom to help the goat herder gain confidence in himself. Eventually the goat herder found companions that were kind to him and did not take advantage of his innocence.

The goat herder learned to trust his heart and value his love, generosity, and sweet nature – horns and all.

bending bows as he soars –

Eagle Boy is me.

The Eagle has landed, finally! Eagle Boy, a 3 foot carved white oak sculpture, is a project I’ve had in the works for about six years. This winter I decided the time was right to finally dig in and finish it.

I first observed two branches of oak joined in the center by a burl, and I immediately envisioned a young boy with his arms in the air waiting to be picked up. I studied it for weeks before I got up the nerve to carve into it. I managed to rough out a pretty good shape that looked somewhat like my vision, but I did not really have the skills or the confidence to go further, so I let it sit.

I began working in other media. First it was bone and then antler. Later I began working with metal. This changed my focus entirely. I worked under magnification and learned to push metal into doing exactly what I wanted.  I think this is what eventually gave me the confidence to go back and finish Eagle Boy.

People have commented on the scariness of the face, and I consider that a compliment. I have long been fascinated by the scary figures on the bows of the Viking Ships. If I’ve created a being that scary, I consider it a success.

“Crossing the Threshold” was a monumental product of my creative process. It represents, in retrospect, my life since I have become an artist. What began as an idea about making an assemblage with silver, turned into an opportunity to use up scrap while reflecting on all that led me to this point.  Perhaps this was brought on by pushing myself to create strictly geometric shapes, or my obsession with making reverse images, which had actually become a distraction from other creative tangents (which is not how I viewed the creative process to be!) But as I began melting down my blunders, pieces of cutoffs, former visions and old ideas, I had no expectations, just a desire to have fun with them. I was engineering things with no meaning other than to add texture, shadow, and create portals that invited exploration…

The journey of this manifestation is not unlike my own journey as I dare to dive deeper into my subconscious. Where should I put the forgotten pieces of my life’s work? I have done so many things, but they’ve all made sense and originated with intentions I understood – to pay bills, build shelter, organize the home. But this was totally random, and I was scared to cross this threshold. I had to rely completely on instinct.

The year had also been like that. I traveled multiple times to Europe, crossing thresholds of my ancient ancestors. There was a mystery behind every one. I felt in my heart the symbols, arrangements of beautiful stone patterns, doors that were thickly textured with incredible handmade hardware. Every door was different and had a different story to tell.

Working on this sculpture filled me with mystery and fear. Somehow the placement of things just made sense, but they were abstract and somewhere buried deep in my mind. Initially the placement meant nothing to me other than it looked cool. I worked on this for three full days, rearranging bits at a time and re-soldering often. I was exhausted by the time it was finished.

Now that I sit with this, the symbols have begun to make sense. The numerals above the door, “2018”, represent a year to cause fear in all of us, crossing into what seems like the new normal of frantic politics and a world gone mad. Fortunately for me, I was so enthralled with the incredible art and culture of Europe that I came home wanting to recreate that beauty. I felt I had crossed over into a new level of consciousness. Now I understood the effect of art and technology. I am both artist and technician. Two minds united in a curious vision.

Other examples of the unintended showed up in this piece.The ‘05 symbolizes a year of my life that began a decade long journey toward 3D art from the flatness of photography. As a photographer, I was left unsatisfied with flat images. I wanted to raise the lines and curves to show the depth more than a photo can do.

The “E” on the doorstep represents the Earth. Another symptom of a disconnected society, our planet in peril  is more apparent in 2018 than any year I can remember. The honey bee, a prophecy of the next extinct species, along with the sun and moon, further symbolizing a planetary crisis. Finally, the chains symbolize restraints put on mankind when living in anything but a free society.

As I salute my grandfathers who fought the Revolutionary War, who trusted us to keep society free, I am thankful my art has the capacity to transport me to another time and dimension, and I hope it does the same for all who view it.

“Inner Child”  represents the continuity of life. He is a mixture of genetic material and earth elements.  Antler, the appendage that once protected its host from prey, is now a face that beams shyly back to life.  Rhyolite, with its beautiful layers of patterns and colors that form as lava flows through the stone, is now an elegant podium. The ivory in its simplicity contrasts greatly with a pink and black earthen mosaic upon which it rests. In the span of three inches, a new life experience is created. May it provide quiet relief from a universe too complex for human understanding.

What started as a study now documents my attempt to form a human face. It was a process of letting go: I tried over and over to “get it right” but always ended up giving in to the will of the metal.

Each began as an empty sphere. Then, as I practiced my technique, a trace of personality appeared. Some were whimsical, some despondent, and some otherworldly. After I had exhausted all attempts to work in this miniature scale, I looked back and saw that a collective energy of these 16 faces had emerged.

To see them side by side is mesmerizing. It’s an adventure to look from one face to the next; it’s like searching for a familiar face or a lost child looking for home.

This new body of work is an exploration of the human face set on sterling silver sheet. What began as a lesson on how to make a human face from a flat sheet of metal, has turned into a passion to form an anatomically correct being on an egg shape dome.

I have been studying all kinds of interesting faces in my travels. No matter how much I intend to reproduce them, they appear very different from my own vision. I am not discouraged, yet driven to see how real I can make them. I am using a variety of tools I’ve made myself. The process is called Repousse – a very ancient form of metal work.

I attribute my success so far to many great instructors, a captive audience, and the curious child within me.

If you’re in the neighborhood (450 Harrison in the South End) on August 4, come on by! 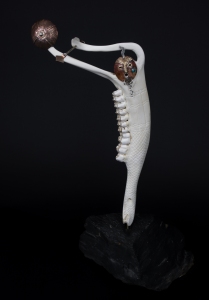 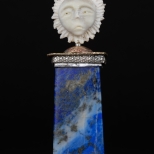 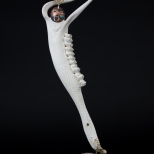 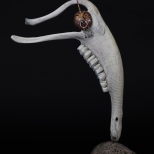 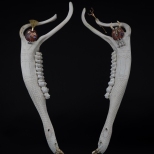 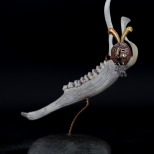 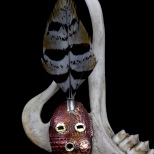 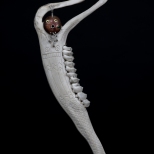 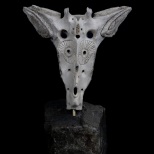 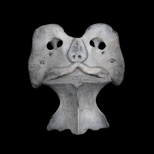